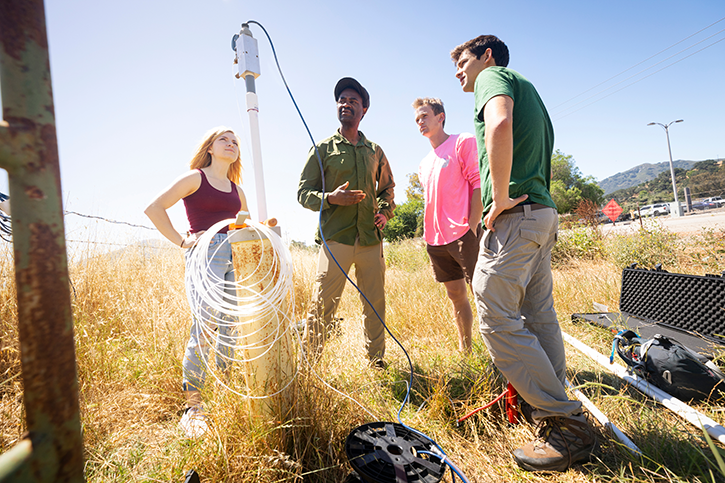 Image: Cal Poly students monitor a well on campus with Dr. Bwalya Malama. This class is one of many instances of the university's signature Learn by Doing pedagogy.

During the last cycle of review, Cal Poly conducted a thematic self-study built around the major theme of “Our Polytechnic Identity in the 21st Century.” Three sub-themes — “Learn by Doing,” “The Teacher-Scholar Model,” and “Integration and Student Learning” — were intended to represent critical aspects of that identity. The exploration of these themes by working groups resulted in a number of specific action items, many of which have been achieved, and also in a number of key policies approved by the Academic Senate. Cal Poly's identity as a comprehensive polytechnic university was also significantly affirmed.

Since the time of Cal Poly's 2012 reaffirmation, WSCUC developed a more streamlined approach called the Thematic Pathway for Reaffirmation (TPR) that allows institutions to focus on the themes that are important to them in a more abbreviated process. WSCUC approved a select group of high-performing schools to participate; Cal Poly is one of them.

The TPR only requires one visit by the accreditation team to the university, without the necessity of the off-site review. It also reduces the size of the self-study from nine sections to four, which results in a 40-60 page report. This report includes an introduction, a compliance section, thematic essays, and a conclusion.

WSCUC encourages institutions to be creative, to build on processes already in place, and to focus on a limited number of key issues that can be addressed in depth. This process is intended to promote significant engagement and improvement among faculty, staff, and administrators. Cal Poly's theme establishes a framework for connecting its mission and priorities with the WSCUC Core Commitments, Standards of Accreditation, and Criteria for Review. This information, as detailed in the WSCUC Handbook, can be found here.

During Fall Quarter 2018, Dr. Mary Pedersen (then Senior Vice Provost and Accreditation Liaison Officer [ALO]) and Dr. Bruno Giberti (current ALO and Associate Vice Provost for Academic Programs and Planning) made presentations to various campus stakeholders, including the President’s Cabinet, the Office of Diversity and Inclusion, the Board of the Associated Students, Inc., the Academic Senate, the Provost's Council, the Associate Deans Council, and the Student Affairs leadership, to name a few. As part of the presentation, they administered a short survey that allowed participants to review a long list of possible themes, selecting the three they considered critical. The results pointed strongly to an enduring campus concern for issues of diversity, equity, and inclusion, as well as a commitment to student success as represented by the CSU’s Graduation Initiative 2025. Cal Poly President Jeffrey D. Armstrong approved the theme submission in January 2019.

In July 2019, Cal Poly received an approval letter from WSCUC to explore the following theme: Promoting the Success of All Cal Poly Students While Achieving the Goals of the CSU's Graduation Initiative 2025. Specifically, Cal Poly will focus on the following three sub-themes:

Since that time, a governance structure has been established that includes a leadership team, a steering committee, and three working groups — one for each sub-theme. The working groups received an approved charge sheet that specifies topics to be explored, questions to be answered, evidence to be consulted, and outcomes to be achieved by the time of the accreditation visit and beyond.